Each of the Holland America Line vessels will choose a ‘Godmother’ for the official launching ceremony of the ship. Its an ancient maritime tradition, and I mean ancient going back to a Babylonian narrative dating from 3rd millennium BC, in launching a ship with ritual and sacrifice. Poor animals that endured that one. But more recently the Greeks and the Romans launched with wine and ceremony! That part of the celebration hasn’t changed I’m happy to say. It was considered an omen of luck for a women to be forefront at the ceremonial launch by swinging a bottle of champagne to break across the ships bow.  Possibly because in ancient times it was far more precarious to take  to the high sees than today, and a women was considered the nurturer, the protector, and hence an omen of luck. But if the bottle did not break across the bow, then this portends an omen of bad luck.

Debbie Reynolds was the godmother of Holland America MS Veendam in the nineties on which one of my dolphin sculptures was installed. The company gave her one of my small sculptures as a gift following the ceremony. She was so supportive, “..wanted to thank your for your magnificent gift, you are so talented” I was touched. 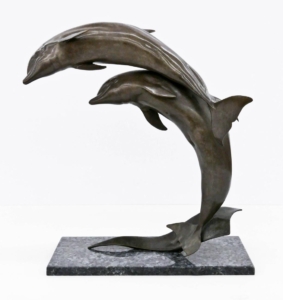 When my mother sailed around the world, one and a half times no less, I was the one who was asked to perform the launching ceremony before seing ‘Gift Horse’ off into the blue, my mother at the helm. I made sure the bottle broke over the bow! 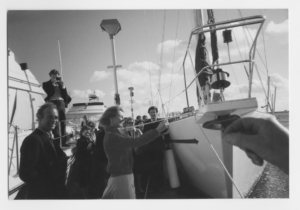 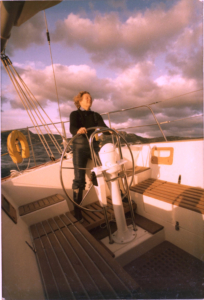